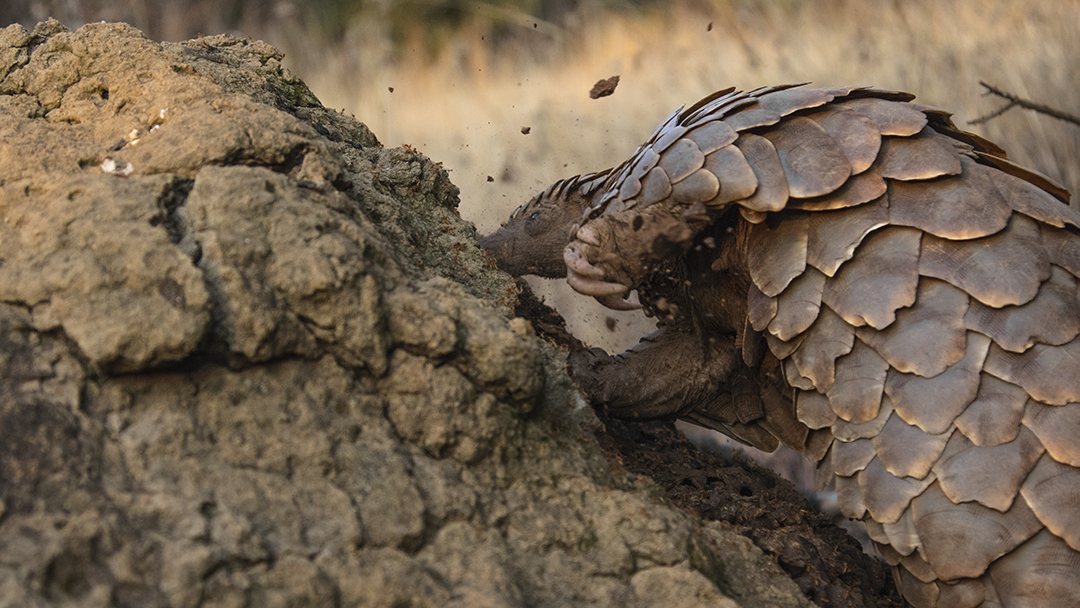 Pangolins are the only scaled mammal on earth, unique in so many ways and are the most illegally trafficked animal on the planet. Pangolins have been on our planet for 83 million years and are leaving it fast….on our watch.

The Temminck’s pangolin is the most widespread of the four African pangolin species, occurring from northern South Africa through most of East Africa and into southern Sudan and southern Chad. It is the second-largest species, with the largest individual to date weighing 19 kg. Individuals average 7–12 kg and may reach a length of 1.2 m. This species prefers savannah and woodland habitats and are predominantly nocturnal.

Temminck's pangolin is entirely terrestrial, and its morphology reflects this mode of life. They are bipedal, walking only on their hind legs while the front limbs and tail are held off the ground and are used as counter-weights for balance. When climbing up steep embankments, individuals may use the front limbs as well to provide extra traction and may also 'push' themselves up with the tail. The tail is fairly broad and extremely muscular, and is used for protection. The diet consists entirely of ants and termites, with ants constituting about 90-95% of the diet and termites making up 5-10% of the diet. Pangolins are solitary, with males and females only coming together briefly to breed. The female gives birth to a single offspring (pup) after a gestation period of 105-140 days.

In South Africa, the trade in these remarkable animals has been increasing each year. They are confiscated from poachers and syndicates in sting operations carried out by undercover law enforcement units. Retrieved pangolins all require periods of specialised veterinary treatment and rehabilitation. The reason for this is that we're dealing with animals who have been through poaching trauma, been held captive by the poachers for at least a week and then been retrieved from the trade. This results in high stress levels and PTSD which, in addition to dehydration, starvation and possible wounds and infections, further compromises the animal. Veterinarian, Dr Karin Lourens has created a thorough veterinary treatment plan for these animals which has shown increasingly good results. This is combined with a rehabilitation programme which varies slightly according to each animal's needs but gradually, the pangolin's stress levels reduce and they relax a little. Pangolin don't feed in captivity so we have to walk them every evening for up to 5 hours, depending on the individual. We weigh them before and after each feeding session to ensure that they're putting on adequate weight. This process is important for their psychological well being as well as assisting them to regain their physical health.

Once they are ready for release, a safe reserve with the right habitat and ant species is identified. During a final physical check under anesthetic, two holes are drilled into specific scales along the pangolin’s back. Two telemetry units are fixed onto these scales using nuts and bolts. One of these is a satellite unit which is programmed to ‘ping’ the animal’s physical position up to half hour intervals. This gives us the overall movement of the pangolin through the landscape and also the time that it emerges from and returns to the burrow. The ‘very high frequency’ (VHF) unit works through radio waves and allows us to pinpoint the exact location of the pangolin using an aerial and a receiver.

Being released into a whole new territory can be a stressful experience so it needs to be done gradually. We have found that some pangolins experience high stress levels if they are hard released and go into a rapid decline. We have had a couple of animals actually die due to this. The pangolin is then put into a soft release process which allows the it to acclimatise to the new area/habitat and to become familiar with the post-release monitoring team. The pangolin is then ’homed’ into its new surroundings, to the point that it is completely relaxed, forages sufficiently and shows clear signs that it is able to meet all its needs – food, water and refuge. The release protocol and process is one that has evolved through the many pangolin releases we've done to date and the post release successes have increased hugely.

For the first 3 weeks, the animal must be found twice a day, early morning and evening, and a visual observation recorded of the type of habitat, burrow type and behaviour. The monitor needs to observe the animal feeding and record the ant species. During the first week, it is critical to weigh the animal daily in the field so that we can ascertain that it is indeed feeding properly. This is important because weight loss is the first indication that the animal may not be doing well and we can then act before it is too late. For the next 2 weeks, the animal must be located twice a week and weighed with a visual observation of behaviour and movement recorded. Thereafter, for the following 3 months, the pangolin must be weighed once a week and then once every second week for the remainder of the year. After that, the pangolin will hopefully have settled in an area and monitoring can continue ad lib. None of this would be possible without the use of technology – the telemetry units. The data recorded from these has helped us understand pangolin behavior and improve our management of their releases.

Monitoring a pangolin on foot in a Big Five Reserve, at night, can be quite an exhilarating experience. One needs to be accompanied by an armed ranger for protection. I have had close encounters with lion, leopard, buffalo and elephant while out walking newly released pangolins on reserves in Zululand. We could write a book about the experiences we have had while working with these amazing animals.